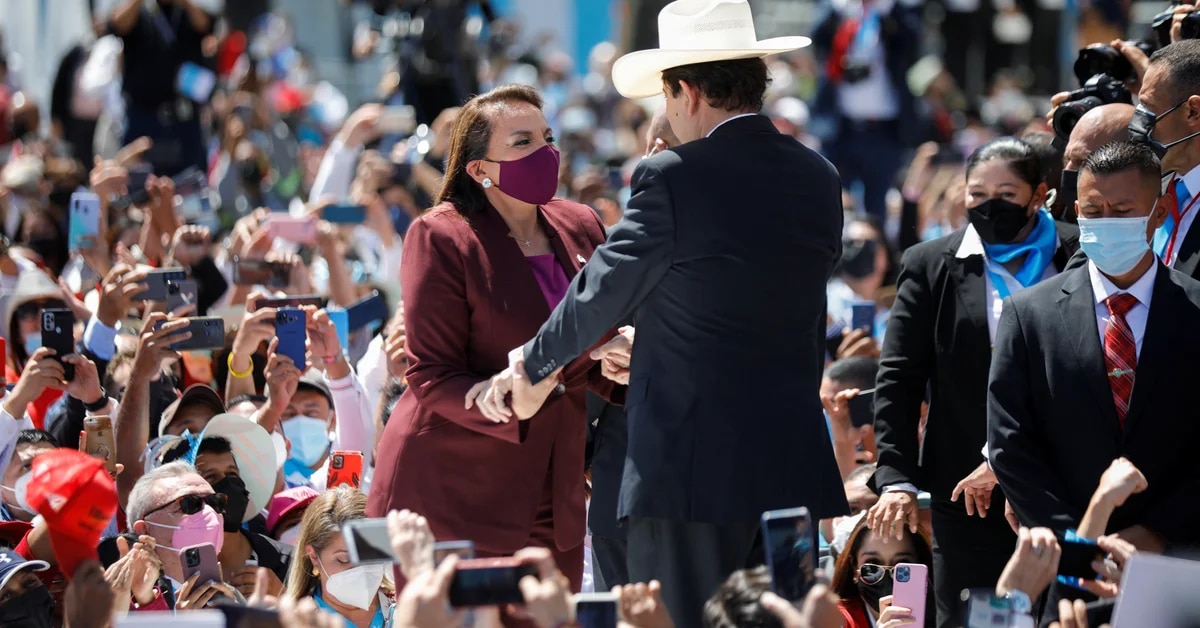 “Dear brothers and sisters. People of Honduras. A female president of Honduras has not accepted the post. 200 years have passed since our independence was declared. We break chains, we break traditions. This historical fact can only arise from the opinion of the majority of the people. People of Honduras, thank you for this respect and trust, ”he said in his opening remarks. The new president of the Hinduras, Siomara Castro.

He said in his government that “education, health, security and employment will be the cornerstone of progress and development.” “More than one million households live in poverty and consume less than 150 kilowatts per month. From this day, They will no longer pay for energy consumption. Electricity in your homes is free“, He said.”More consumers will subsidize that energy.

Left-wing Siomara Castro, The first woman to rule Honduras, took office this Thursday in a country plagued by poverty, displacement, drug trafficking and corruption, while suppressing the crisis in parliament that threatened her leadership.

11:42 (local time) Siomara Castro began her tour of the National Stadium with her husband Manuel Zelaya and their children. It was received with applause, cheers and applause from the public, who chanted “Yes it can!” A few minutes later he came on stage to start the ceremony.

After the Armed Forces parade, Luis Redondo, a member of the National Congress’ Board of Directors, resumed his session of Congress to continue his inauguration. The president’s granddaughter took the constitution into her own hands at the same time as Judge Carla Romero.

“I promise to be loyal to the Republic and to abide by and implement its laws,” said Siomara Castro. By making the promise of the law as the new president of Honduras.

Following that, Salvador Nasrallah was sworn in as President. Moments later, US Vice President Kamala Harris took the stage. Doris Guttierez He took the oath of office Presidential appointment. Then it was Renato Florentino’s turn.

After taking office, Castro became the first woman to lead the country, becoming the new President of Honduras.

“I get it in bankruptcy”Castro said after taking office. “People need to know what they did with the money and where the $ 20 million they borrowed is.

“My government will not continue with the looting cycle”, He promised. “We are going to uproot the corruption of this 12 year dictatorship”

The event was attended by international delegates, heads of state and key allies, as key allies of the new government taking office today, the historic day of the first woman to lead the country in history.

King Philip VI of Spain He was one of the special guests at President Ciomara Castro’s inauguration.

Armed from dawn Large queues in the national state, where about 29,000 people attended the inauguration ceremony. They came with flags from Honduras and the Red, Free Party. Before that, a Mass at the monastery of Swaba. Meanwhile, the singers performed in the stadium, where the public waited for the opening time, set for the afternoon (local time, 18 GMT).

Many thanks before the inauguration ceremony

“Twelve years of struggle and 12 years of opposition. The beginning today is the people’s government. Good morning, Honduras, ”Castro wrote at the start of the day on Twitter.

The list of guests at the opening ceremony, in any case, is extensive and very varied. Chavez’s old allies Argentina’s Vice President Cristina Kirchner and former Bolivian President Evo Morales are on the payroll.. The summons was also sent to the President of Mexico Andres Manuel Lopez Obrador Y Gabriel Borick, Chile’s newly elected president and the new face of the Latin American left, as well as The King Philip From Spain.

See also  Russia and Ukraine: The conflicting pone in jacus clams for Argentina

However, much has been said about the US Vice President’s visit. Kamala Harris, And what does that mean for Castro’s presidency. The White House number two coming to Tegucigalpa is a key indication that Washington is betting on an alliance with Honduran in an area where other options are not possible: flirting with Russian President Alejandro Chiamate. The ongoing clashes between Guatemala and Salvador Naib Bukel and the Biden administration have opened up a lot of land for Castro.

Although Castro has been described in the campaign as a communist, “The United States understands that he does not represent an extreme left, but rather a hope for the people of Honduran”, Researcher Eugenio Sosa was considered a researcher and professor at the National University.

Castro needs international support to negotiate over $ 11,000 million in foreign debt. For former Foreign Minister Eduardo Bass, the issue goes through an arrangement “With multilateral companies, Washington has more influence.”

The new president of Honduras, who was the first woman in three years and five months of her husband’s presidency, had a low profile. Politically, he made his way after the conspiracy against Zelaya on June 28, 2009, when he encouraged constitutional reforms, the law did not allow him, although it did not justify his ouster.

After the coup, Castro and thousands of his comrades took to the streets to protest and demand the restoration of constitutional order. It even endured the rejection and humiliation of some sectors that agreed to the coup, including many businessmen and opposition politicians.

Castro greeted his supporters at Tegucigalpa (AFP) this Thursday

Over the past few days, Castro has had to deal with Rebellion of 20 representatives of independenceThe political party he founded, along with President Manuel “Mel” Zelaya, who was ousted in a coup in 2009. The Liberal rebels have joined 44 delegates from the National Party and 18 from the Liberal Party to oust Luis Redondo, a legislator loyal to Castro., But not a member of Libre, but a member of the Honduran Salvador Party, the other actor in the coalition that won the presidency

Libre dissidents argued that the presidency of the Congress was similar to that of the party. However, as Honduran historian Jorge Amaya explains Infobe, The opposition coalition that won the election was sealed last year with a code of conduct that, if it wins, would handle the regime of the Libre administration and the Salvador Party of Honduras in the legislature.

With the uprising, the opposition to Castro elected a board of directors of Congress, while loyalists to the president received the votes of alternative representatives. A) Yes, The president achieved his day at zero as the first challenge to the political power granted to him by both Congresses and elections.

Castro supporters at the stadium to watch the ceremony (AFP)

Beyond the main reading of the congressional crisis and the devolution of power at home, the alliance between Libre and the National Party dissidents speaks to another serious issue: The immediate future of Juan Orlando Hernandez, Popularly known as JOH, Xiomara Castro ousted and weighed in A U.S. court in the southern district of New York has ordered his extradition for crimes related to drug trafficking.

By which the researchers consulted Infobe Come inside Tegucigalpa Libre Rebellion Hernandez’s agreement with the National Party aims to save him from deportation. When Castro took office, JOH will lose the political protection granted to him by the presidency since 2017, when the US justice system began investigating his brother Juan Antonio “Tony” Hernandez for drug trafficking.

for now, JOH seeks asylum in Central American Parliament, As an accomplice, this will protect him from legal action in his country, but, Outside of the presidency, it will be very difficult for him to protect himself from deportation.

Siomara Castro offers resignation to dissident leader and hopes to end crisis in Honduras
From Honduras, Christina Kirschner attacked the judges and talked about the “judicial conspiracy”.