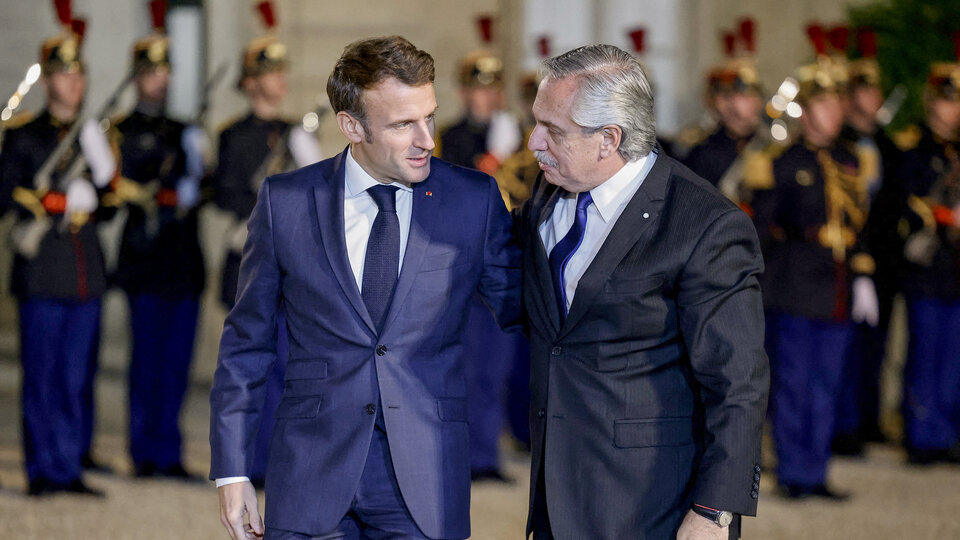 President Alberto Fernandez, who is already on French soil, met his counterpart Emmanuel Macron at the Elysee Palace. The agenda revolved around four main issues proposed by the European President: the war between Russia and Ukraine; the situation in Venezuela; The scene in South America after Lula da Silva’s victory in Brazil; And the economic and social situation that Argentina is going through in particular. Before starting, however, the first thing the French president did was offer Fernandez his solidarity for the attack suffered by Vice President Cristina Fernandez de Kirchner. He said that he rejects what happened and that the rise of hate speech around the world is serious. The Argentine president thanked him for his concern and from his environment assured that Fernandez accepted the challenge they issued to CFK judge Maria Eugenia Capuchetti.to dissect) Fernandez watched the video uploaded by the Vice President while on the plane when the signal was received.

Paris has made this Thursday a special day. The sun was there, but that didn’t stop the autumn chill from soaking into the bones. At least two different realities coexisted throughout the day at the Arc de Triomphe. On the one hand, tourists are excited, smiling and taking photos. On the other side, on the wide avenue des Champs-Élysées you can see a sea of ​​small red lights, with hundreds of cars parked. Among them were the French, caught in a traffic jam. The situation remained the same throughout the day as heavy traffic came to a standstill. Workers are demanding better wages. In France, as in Argentina, inflation wreaks havoc, although here the numbers are much lower than in our country.

The massive inflation caused by the war between Russia and Ukraine is one of the explanations why Macron is so committed to ending the war. This is one of the central themes of the Forum for Peace, which opens in Paris this Friday, and is also one of the G-20 leaders’ summit in Indonesia. An Argentine delegation will leave on Sunday, accompanied by Economy Minister Sergio Massa and Vice President Juan Manuel Olmos.

The caravan of black cars that took Alberto Fernández and his entourage from Charles de Gaulle airport – which arrived just after two in the afternoon – made its way through traffic to the hotel, located a few blocks from the Louvre museum. In a very dirty and noisy Paris, with hundreds of parked cars.

Once at the hotel, the President met with the Minister of Foreign Affairs, Santiago Cafiero, and the two went to lunch alone at a bar in the lobby. They then went to the Elysee Palace, which serves as the seat of the French government, to meet Macron. Only the subway connecting the hotel to the palace was operational, as it had no drivers, but worked automatically. Fernandez, of course, went by car and it took a long time to get there.

Before starting the meeting, the two leaders gave a short statement to the press. Getting out of the vehicle, Fernandez told Macron “my friend” And they embraced each other. “I have a sincere friend in Emmanuel, who respects and admires him and shares a common ideology of the need for a world in peace and democracy. For Argentina, it is very important to know that there is a French president at the center of Europe. The ability to listen to the countries of the southern hemisphere and especially Latin America has,” said the President. As a gift, the president brought the book to Macron Last prefaceBy Jorge Luis Borges.

Together with Fernández, the president of CELAC, Macron had previously promised that we want to create a geopolitical order that will allow stability in the world, peace in the European region as soon as possible and development of energy. Situation and food industry affected by this war started by Russia”.

Regarding Argentina’s economic situation, Fernandez told Macron there was “growth” and described the challenges ahead. Macron asked him how he could help, and he responded by encouraging debate to end additional payments to indebted countries like Argentina. He emphasized that it is necessary to stop treating this as a problem for our country as other countries like Ukraine suffer from it.

Macron said Argentina had arranged a deal with the Paris Club to pay off its debt and that the G20 summit in Bali would be a good time to talk about it. There, Macron met with the head of the International Monetary Fund, Kristalina Georgieva, and explained that she could comment on the situation. They also talked about renewable energies and lithium on the economic front. French company Eramet will invest 600 million euros in the country to manufacture lithium batteries.

The Argentine president, in another segment of the meeting, spoke about the lunch he had with Lula da Silva and the importance of his victory at this time for the region. Macron was excited. The meeting was also attended by Julio Vittobello, General Secretary to the President; Spokesperson, Gabriela Cerutti, Minister of Foreign Affairs Cafiro; The Secretary of International Economic Relations, Cecilia Todesca Bocco and the President of UNESCO, Marcela Losardo,

Russia and Ukraine: A Statement at the G-20

Fernandez sat down at the table with the idea of ​​telling Macron that they should at least propose that nuclear weapons not be used in a war between Russia and Ukraine, or that Ukrainian nuclear power plants not be attacked. going on Macron has doubled down on the bet and said to go for a general approach, thus ending the war, because any specific discussion refers to the center.

Macron said he could lead that approach, but he needed important voices from other parts of the world, such as Argentina, India, South Africa and Asian countries. Along these lines, they are preparing a visionary proposal to present at the G-20, which Russian President Vladimir Putin is scheduled to attend. “No one is going to tell Putin to stop hostilities, but this will be a proposal that the world will make on this issue,” they explain.

The situation in Venezuela

Another dish on the menu, however, will have its central moment in a particular meeting this Friday on the subject, the situation in Venezuela. Macron had a strong stance with the country and even accepted Juan Guaidó’s bid for the presidency in 2019, but now he has changed his mind. In the war between Russia and Ukraine, Europe is interested in Venezuelan oil, as is the United States. In Fernández’s six previous bilateral talks with the French, Argentina insisted that “Venezuela cannot be the new Cuba” and that sanctions must be lifted. In this meeting, Macron said he agreed with him and decided to go in that direction. Lula and Mexican President Andrés Manuel López Obrador have.

This Friday the Argentine government will propose a female candidate to head the Inter-American Development Bank (IDB). Official sources close to Fernandes confirmed this. This Friday is the last day for member states to register their candidates after the impeachment of American Mauricio Claver Caron. The election will be held within the framework of the Governors’ Conference in Washington on November 20. In the last days, there were speculations that the candidate could be the Minister of Economy, Sergio Massa, but from the presidential entourage they denied that version and assured that the candidate would be a woman, whose name they did not want to say yet. This indicates that Cecilia Todesca will be Pocco. The announcement will be made by Fernandez or Foreign Minister Cafiro.