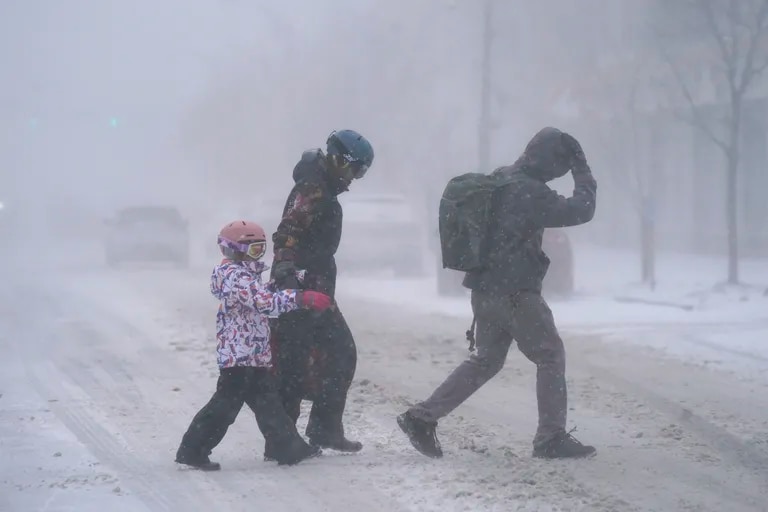 It is not one Christmas And inside America. Sadness took over the religious holiday. due to Temporal history of strong and winter Officials said in the last hour that it will affect the country At least 34 civilian deaths in eight states. There are dozens Thousands of homes have been without power today due to strong polar winds that have been blowing for four days The so-called storm hit the central and eastern parts of the country “Elliot”.

Extreme weather, with Snowfall and temperatures as low as 48 degrees below zerocaused Thousands of flights were canceled and many roads were impassable At a time when people usually travel from one city to another to commemorate the festivals.

The Erie County, In northwestern New York state, it was hit particularly hard. There 7 people died due to the storm, today Mark Polancarz, responsible for this district, during a press conference, AFP reported. Some casualties were found in cars, while others were found on the street in the middle of the snow. “It’s a big disaster.”He indicated, and did not rule out, that there were more deaths.

“People have been stuck in their cars for more than two days, while others are in homes with sub-zero temperatures.”The officer warned. Another 30 to 60 centimeters of snow is expected to fall overnight, according to the latest bulletin. National Weather Service (NWS).

As of 7 p.m. tonight, the NWS reported a total of 109 centimeters of snow at the Buffalo-Niagara Airport. Daylight revealed cars covered in nearly 2 meters of snow and thousands of homes in the dark with no electricity.

The A travel ban is in effect in the area from Friday, but hundreds of people were still trapped in their vehicles. To rescue them, New York Gov. Cathy Hochul sent the National Guard to Erie County and Buffalo, where emergency services were nearly paralyzed. Around 1,346 domestic and international flights were cancelledAccording to the website FlightAware.

Buffalo will not be fully powered before tomorrow, alerted the Bolancars and asked residents not to leave their homes as the roads were impassable. “The wind is so strong,” he said yesterday, with snow forming like “sand dunes” and it was “crazy”.

According to the site Poweroutage.us, nearly 1.7 million customers nationwide were without power over the weekend, and 153,000 subscribers were without power this afternoon. Maine, New York, Virginia, Washington, and Vermont are the hardest hit states.

From Friday afternoon, The storm was a “low-pressure bomb”: a collision between two air masses, a very cold one from the Arctic and another from the tropics from the Gulf of Mexico.. These types of events can produce heavy rain or snow, coastal flooding, and hurricane-force winds.

Icy roads also led to the temporary closure of some of the nation’s busiest routes, including Interstate 70, which runs through much of the United States from east to west. Cities like Denver or Chicago opened shelters to accommodate the homeless and protect them from the risk of hypothermia.

Neighboring country Canada was also hit by the storm and weather warnings were in place for all provinces. Hundreds of thousands of people lost power in Ontario and Quebec, and flights were canceled at airports in Vancouver, Toronto and Montreal.

In British Columbia, 53 people were injured in a bus crash Saturday night about 330 kilometers east of Vancouver, officials said.

With information from AFP, Télam and AP