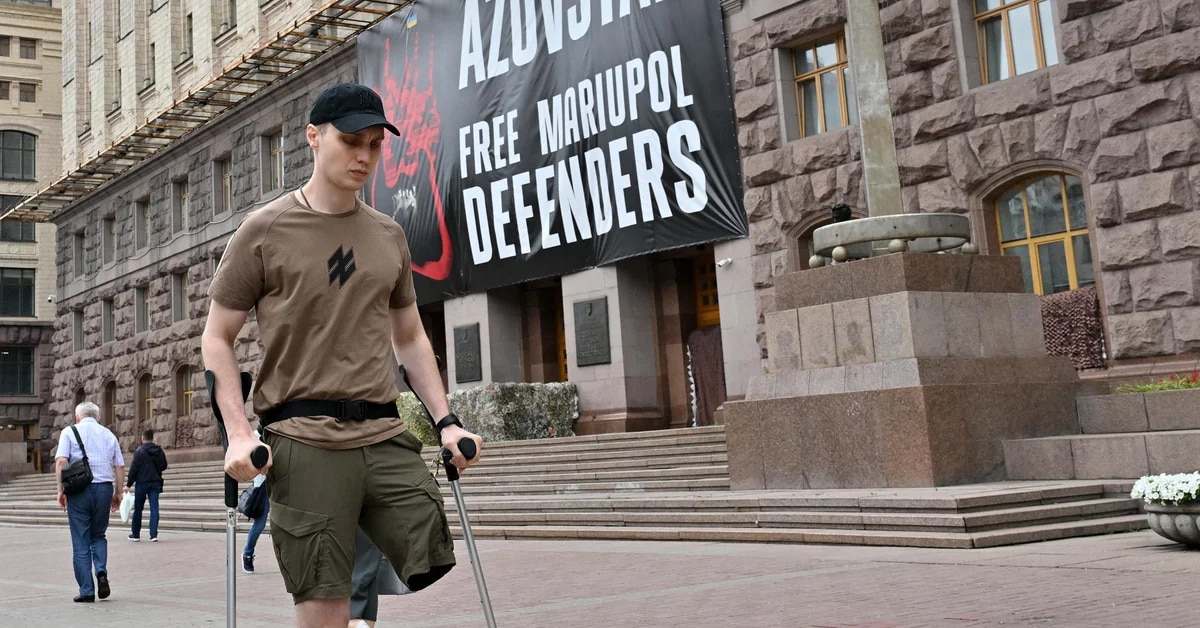 In the center of the queue, amid the summer crowd, the Ukrainian army Vladislav Zayvoronok describes the hell of the Mariupol siege, the amputation of one of his legs, and how he suffered during the weeks of captivity.

“It just got worse and worse, harder and harder. We conducted security as best we could”, assures AFP This soldier from the Azov Regiment participated in the Battle of Azovstal Steelworks in Mariupol, a symbol of determined Ukrainian resistance to the Russian invasion.

With the help of crutches after having his left leg amputated, Vladislav, 29, talks to them AFP “Free the defenders of Mariupol” in front of a large banner hanging on the facade of Kyiv City Hall.

Moscow launched its invasion of Ukraine on February 24: within days, Mariupol, a strategic port on the Sea of ​​Azov, was surrounded. 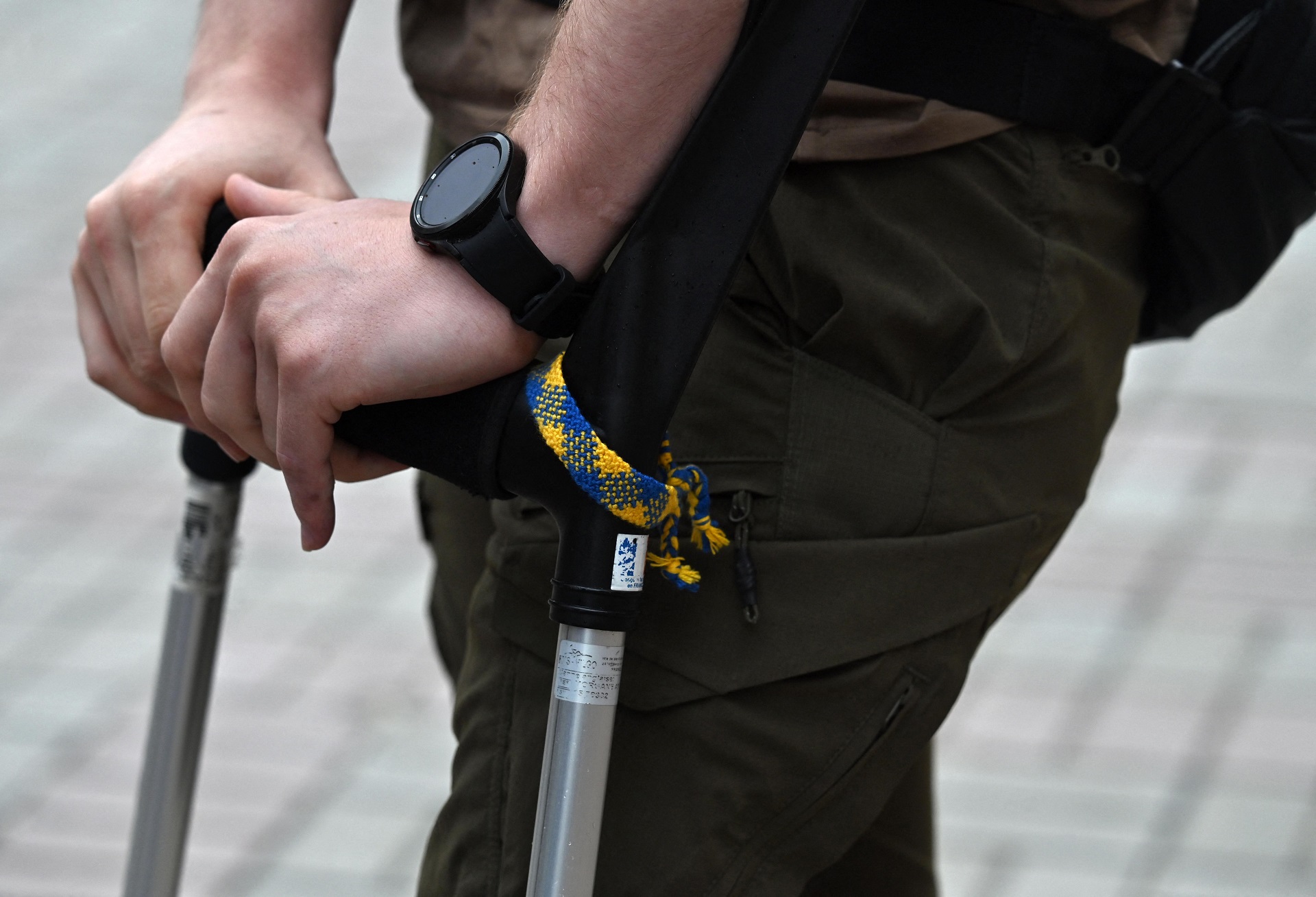 Detail of the Ukrainian flag with colors (AFP)

Vladislav and his comrades barricaded themselves in Azovstal’s vast and complex metallurgical complex to continue the fight.

Under constant bombardment, he settled in a half-ruined bunker. During the day he goes out to perform his duties as a drone operator.

“The whole area was littered with building fragments” and soldiers They lacked water, food and ammunitionPeople strolling the streets of central Kew, the man recalls, noticing his missing leg under his brown shorts.

Despite the rapid deterioration of the situation, the soldiers kept their morale high, Vladislav says: “A few days ago, he predicted a final battle of sorts. We were waiting for her and we were ready”. 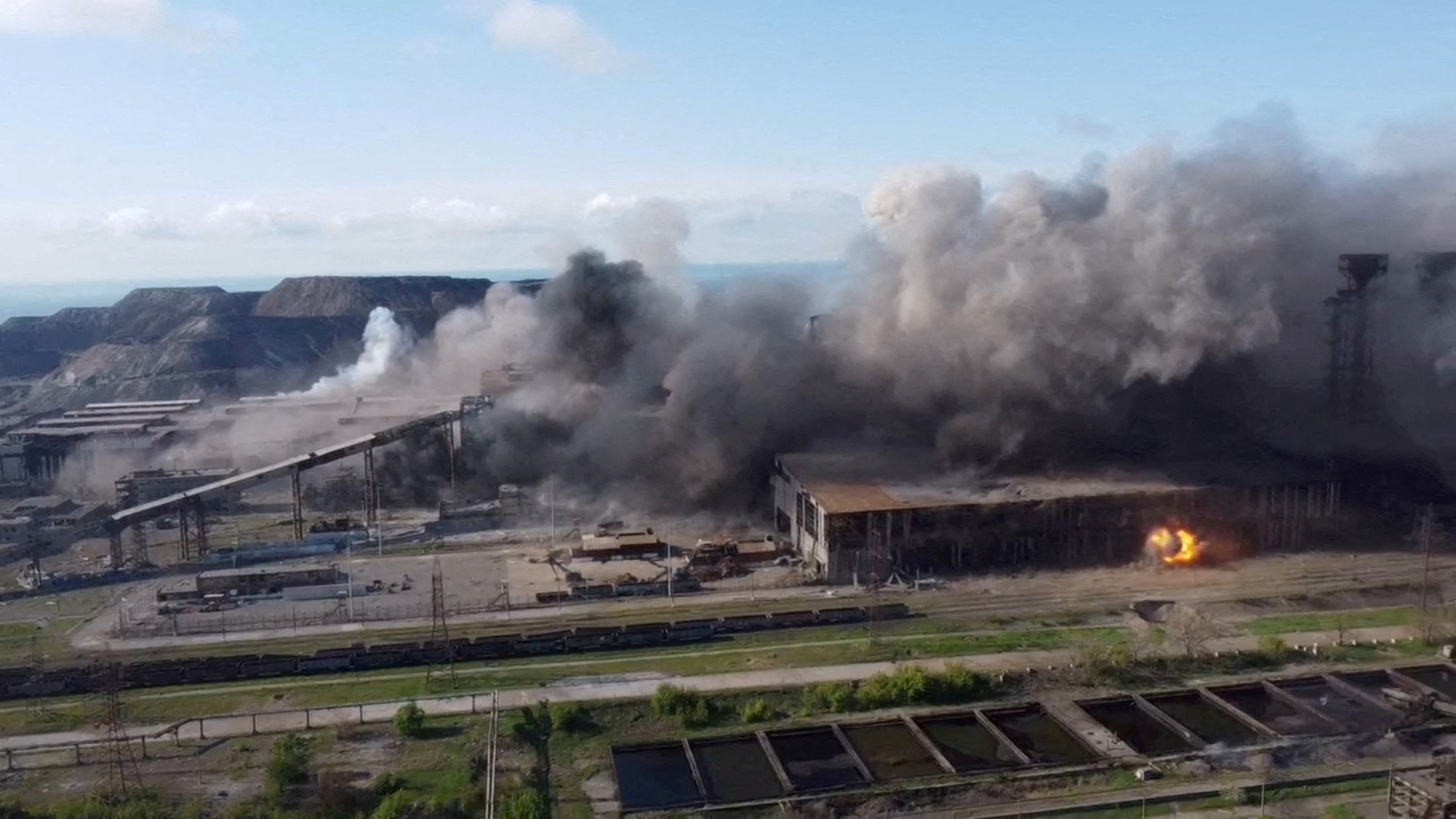 But on May 15, An anti-tank missile hit it. He was rushed to the “medical bunker” where, in a dangerous operating schedule, He was in the realm of the dead.

The next day his leg had to be amputated. His right eye was also severely injured.

Vladislav was taken out of the compound as part of a deal that Kiev hoped would force the militants out of Azovstal.

He remembers seeing Russian soldiers’ insignia with the symbol “Z” used by the enemy.

Because of his injuries, he did not meet the same fate as his comrades sent to Olenivka prison in the occupied part of Ukraine’s Donetsk region, where dozens of inmates were killed in an explosion in July. 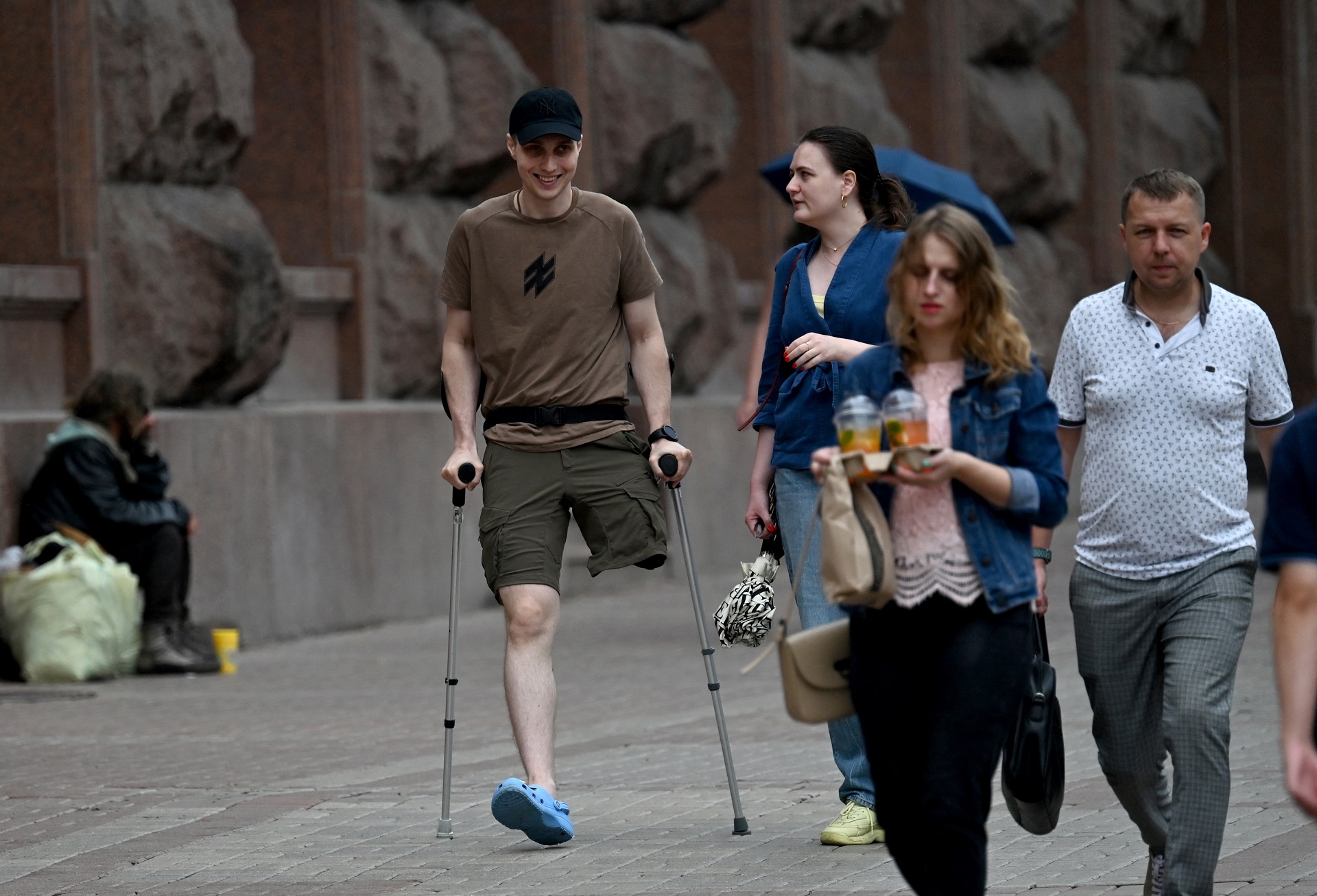 But weeks of captivity in a Donetsk hospital brought him another kind of suffering. “There was a moral pressure. No contact with relatives, no phone access,” says the soldier.

Medical care was “very limited” and medicines were in short supply. “It was oozing like rotten meat, because I was so badly injured that I started antibiotics on the fifth day.“, dice.

According to Vladislav, he and three other players from his room They received enough food “so that the heart did not stop.”

“Every day they told us, we don’t need anyone, we won’t trade, everyone has abandoned us“, Collaboration. 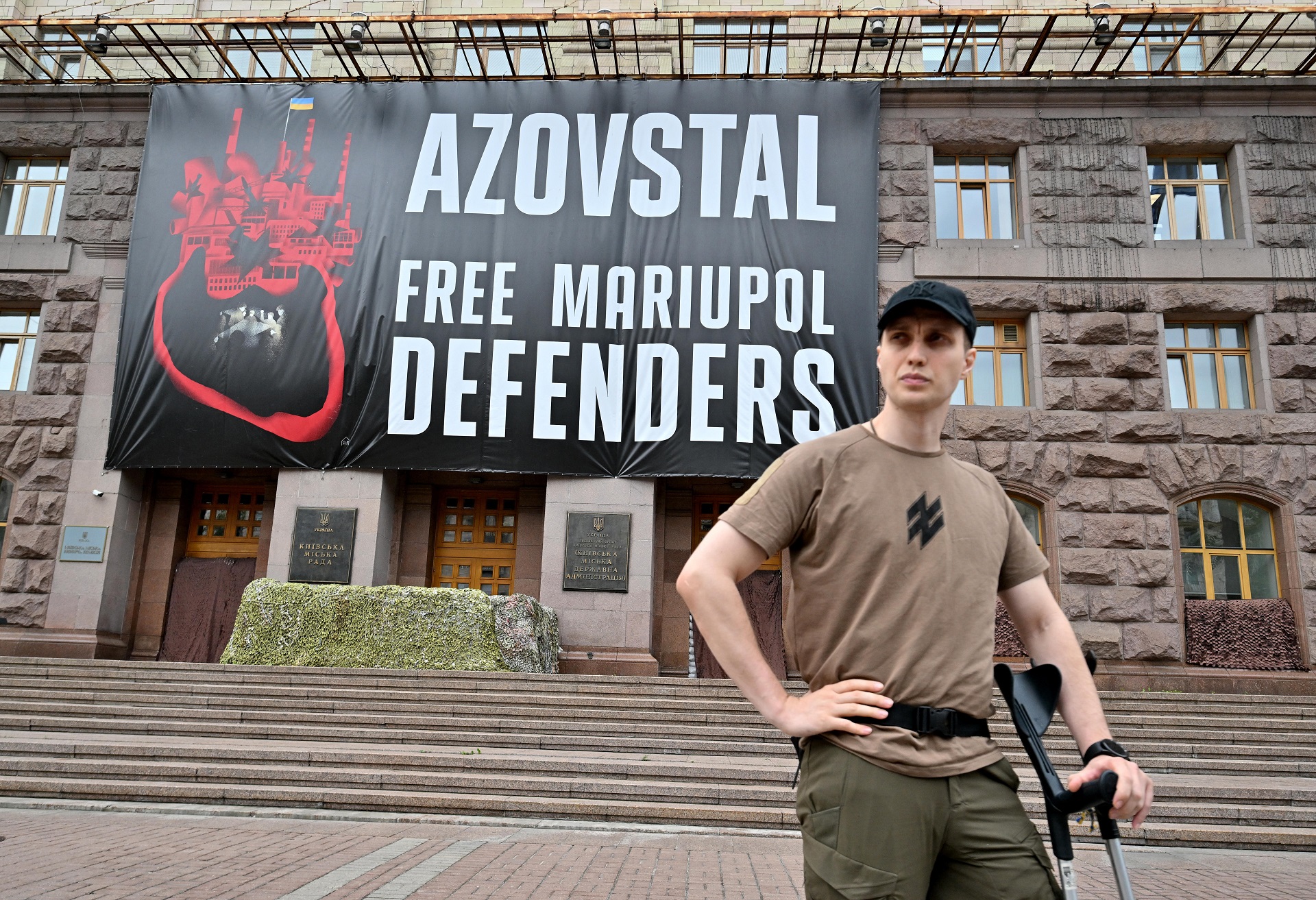 “Free the defenders of Mariupol” (AFP)

Suddenly, his six-week imprisonment was over. “They woke us up at 4 in the morning, read (the list of prisoners), took us out, put us on a bus and drove us away at night,” Vladislav recalled.

On that day, more than a hundred Ukrainian prisoners were exchanged.

“I couldn’t breathe until I was on the Ukrainian side, out of range of the Russian artillery”, confirming that the soldier’s injuries did not stop him from taunting him. “I gave our doctors a lot of work,” says this career soldier with a smile.

He expresses himself calmly. As he talks about the thousands of Ukrainian prisoners still in Russian hands, his voice breaks only once.

“It doesn’t let me down. It keeps me inside. When the boys come back, I can breathe more freely,” she says.

(With information from AFP/By Dmytro Gorshkov)

Zelensky warns Russia about prosecuting Ukrainian captives: ‘If they do that, there will be no more negotiations’
The Russian military says it has used the Kinzel hypersonic missile three times in Ukraine.