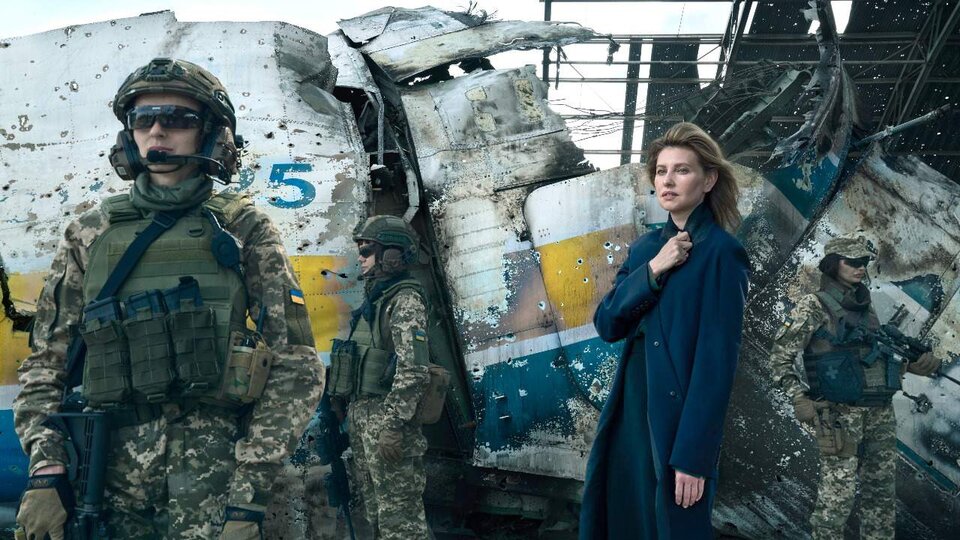 The Conflict in Ukraine In the past few months, she has left the front pages of the world, and in an attempt to regain visibility, Zelensky decided to play her queen. For this Olena ZelenskaThe wife of the President of Ukraine gave a statement to the press Vogue. “A photograph is always an object in context”, Susan Sontag taught us. Brand Vogue A luxury fashion magazine, affiliated with Celebrities Globally and in haute couture style. Headquartered in New York, it is considered the most influential fashion magazine in the world.

Part of the election campaign that brought Zelensky to the presidency took place during the fourth season of the series. servant of the people, It features him as the protagonist and Zelenska as the screenwriter. A mix of fiction and reality is what life in Ukraine looks like today. But while for some all reality is reduced to a story, for others all history cannot be reduced to a soap opera that blurs the distinction between reality and fiction.

Annie LeibovitzJournalist photographer Rolling StoneAuthor of Historic Photographs and Susan Sontag’s partner for 15 years, was chosen to report. In his photographs, scenes connected with war are real. The report takes place in Marisky Palace, the imperial residence until 1917, on the outskirts of Kew, the presidential office and Antonov Airport. Zelenska refers to the demand for weapons of war in this statement.

We see in the photo chosen for the cover of the magazine Zelenska sits on a step of the palace’s marble staircase, looking at the camera. For the parameters of a fashion magazine, her hair is disheveled, with no make-up, no jewelry, low shoes and clothes of sober colors, black pants, a light shirt. The only touch of difference is the edges of the shirt. Zelenska has no watch or bracelets and sits on a marble slab, the spotlight behind her showing the columns of the palace, between which sandbags can be seen. Inside the magazine, a photograph shows a larger view of the same situation. There you can see variation A large blue mat piled with sandbags. An armed soldier poses for a photograph with his back turned.

In another photo, Zelenska appears next to the wreckage of a downed plane, standing with a group of female soldiers at Antonov airport. She is photographed, armed and wearing a blue coat that stands out from other military women in camouflage clothing, she wears a skirt and a long blue coat, carrying the coat to her chest. The colors of the clothes match the remains of the plane. The female players look in different directions as if they are taking care of their safety at that moment. The film combines glamor and pose in a battle setting. Know the art. Female soldiers are real, the setting is real but, stolen during that time of war (or as part of their duties in the army?), the soldiers (the word is not feminine) Vogue.

An exercise, an artificial pose with real actors, we see the difference between the real and the imaginary.. Simulation is not hidden, settings, sets, poses, costumes, main and secondary roles are selected. Know everything. There is no misrepresentation, female players act as female soldiers, the simulation is transformed into a real photo. The Ministry of Defense of Ukraine shared one of the photos of the report on its social networks. In this case, simulation is a strategy for disseminating reality.

The presidential couple stars in two other photos from the report. In one of them, both of them look at the camera, Zelensky wearing a simple army green shirt, she in blue, shirt and pants. They dress smartly and casually, and he holds her hand firmly and firmly, giving her a sense of security and care.. There is no flamboyance in the image, only her rings are visible, and the colors of her clothes match the stripped and gray surroundings. In another photo, the two look at the camera, this time holding hands. In the inscription they tell us that the photo was taken in the office of the presidential complex in Kiev. Zelensky’s t-shirt and pants match a green leather chair, while Zelensky poses on the marble steps in an ivory shirt with the same fringe. Behind them on an armchair can be seen a new portrait of Zelensky still wrapped. They don’t smile, their gestures show anxiety and depression. Every detail in the four films is observed and calculated.

The photos allowed people to talk about Ukraine again, but not about the war. Searched through the strategy The romanticization of conflict Keep the spotlight there. But mediation at any cost has its risks. Not because fashion magazines can’t talk about war, but because fashion and other experiences intersecting with war have created powerful and disturbing images. For example, acted Lee Miller, model and photographer, photographed the first liberated Nazi death camps. After photographing the horrors of the Dachau concentration camp, Miller and David Sherman break into Hitler’s apartment in Munich. Sherman, reporter LifeDepicted her naked in Hitler’s bathtub. The film has a message of exclusion, mockery and revenge. A symbol of victory. In the famous photo, Lee Miller is in a bathtub, with a portrait of Hitler in the background, and Miller’s muddy boots propped up on the bath mat. The photograph is not a simple provocation, but rather a negative and demanding message.

See also  Emmanuel Macron changed the flag of France three years ago, and no one noticed

In the statement to the Zelensky couple, the war seems to have been captured by the rules of fashion and entertainment. There are calculated poses and melodrama. For a few days the front pages of the world’s journalism turned to talk about Ukraine, but not about the war or the refugees, the loss of life or the geopolitical interests involved. But the correct timing of this statement or not.

The “society of mirrors” seems to have taken over everything. Also a representation of war. Fashion magazine as accent channel in this case Neutralizes and closes images in the register of superficial and business cycle. A commitment to visibility is reduced to the mediocrity of images.

The photos were also posted on Annie Leibovitz’s social media. They went viral and garnered thousands of negative reactions: The Hollywoodization of tragedy, the trivialization of war as a consumer commodity, the counterproductive juxtaposition of impressions, the exaggeration of glamor and suffering, the aesthetics of violence at the scene of disaster, The alliance of fashion and politics is characterized by a lack of empathy, unethical communication and victim-blaming pettiness. Conflicts are some of the arguments that can be read in opinion pieces and social networks.

Some voices that did not question the statement pointed out that behind these photos there was a well-thought-out communication strategy to keep Ukraine on the media agenda, and that in times of female empowerment, Olena Zelenska’s approach was reminiscent of that role. of women in conflict.

What would the millions of Ukrainian refugees forced to flee their homes under Russian bombing think of this statement? Hard data from the war show that about 9 million Ukrainians had to flee their homes and seek refuge abroad, the majority of whom were women and children. Men between the ages of 18 and 60 are forced to stay in the country and are called to join the armed forces. It is estimated that 5,000 Ukrainian civilians died and there is no precise information on the number of Ukrainian soldiers killed, but some media talk about 200 per day since the conflict began. On the Russian side, the Pentagon’s undersecretary for defense said from Washington that the military has suffered between 70,000 and 80,000 casualties since the military began its military operation in late February. The veracity of these numbers is yet to be known.

Susan Sontag, in her book About the pain of others, Discusses the complexity of the horror exhibition and points to the hardening of a type of audience on the one hand, who listen to more and more pain, more brutality, more accumulation of anonymous suffering; On the other hand, there is more horror, moments where the horror unfolds. The ruins left by a war are always subject to aesthetic thought. But nothing like that happened in this report. “War and Passion” focuses on the story of the presidential couple in a besieged palace.

Rather than falling into moral or ethical arguments, these posed photographs of war scenes do not seem to create emotion, solidarity, or knowledge about the sufferings of war. And the Ukrainian president didn’t help the couple get more weapons.

Sondak points out that they appear as verified photographs: “Its main effect is to turn the world into a supermarket (…).

Some time ago Marshall McLuhan taught us that ‘the medium is the message’. Vogue He was the one who produced and distributed the photographs. Photographs in a war zone that became fashion photographs in a fashion magazine. Can today’s social conflicts and human dramas around the world leave an aesthetic and commercial register untouched? Do the photographs in this report fall under the category of war photography?

The conflict between Russia and Ukraine continues.

So far he has won Vogue.