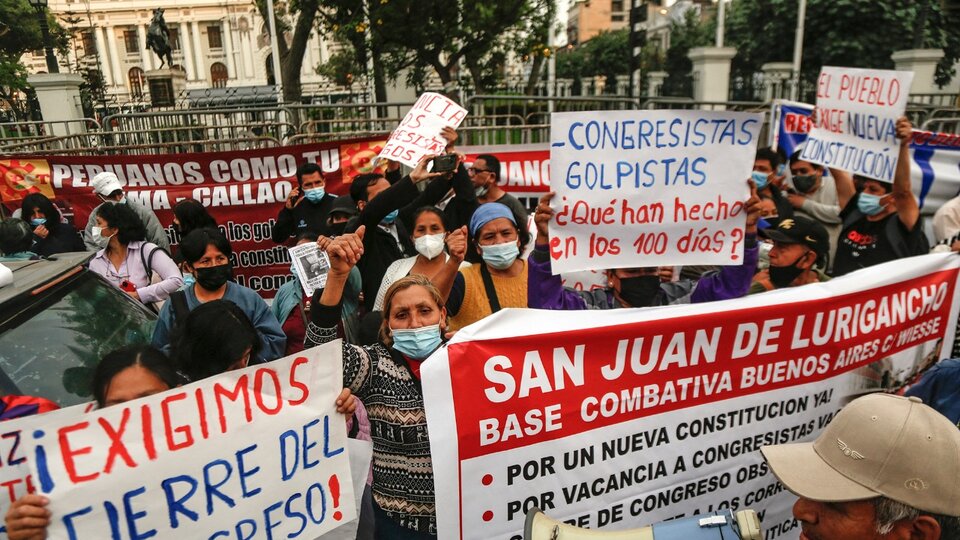 The far-right is pushing Peru into the abyss of chaos. He redoubled his commitment to a coup against the progressive government that won the election. The post of farmer, rural teacher and left-wing trade union leader is still four months away Pedro Castillo, Right-wing accelerates coup plans by putting forward a motion in Congress Remove the President for “Moral Disability”. Demands that have no serious support, arguments that are too weak to fit even in a vague image of what is called “moral impotence.” The same political departments that did not accept Castillo’s electoral victory Keiko Fujimori, They tried to ignore the outcome of the election by claiming non-existent fraud, tried to prevent Castillo from running for president, demanded a coup, and are now trying to disguise the removal of the president from Congress for that coup as it is legal.

Castillo points out that behind the parliamentary conspiracy to remove himself from the presidency are groups “accountable to the judiciary” and groups seeking to regain power. Keiko Fujimori, the leader of Fujimori, played a key role in promoting the parliamentary coup. He has been charged with money laundering He will also face trial in the coming months with a request to face up to 30 years in prison. “They want to undermine the company, they want to destabilize the country. They could not tolerate a teacher, a farmer, a president coming to power,” he said. The President pointed out.

The demand to declare Castillo “morally incompetent” contains absurd arguments, such as accusing him of re-establishing diplomatic relations with the Venezuelan government or allowing the former Bolivian president. Evo Morales Enter Peru and meet political and community leaders. The right-wing accuses Castillo of appointing officials linked to terrorism. Accusing left-wing political and community leaders of being terrorists is a common practice of right-wingers in Peru. Former Minister of Labor, Iber Maravi, Accused of being a “terrorist” by the opposition and the media. Based on police reports 40 years ago and the confessions of prisoners taken under torture, he was accused of being a member of the Glow Path. The Maoist armed group was defeated two decades ago.

Other allegations in support of his immorality include allegations that Castillo pressured military leaders to support the promotion of some officers, a complaint made by two retired generals, which are still pending. He would have tried to favor the merchants before the tax authorities, not really involving Castillo, but his former secretary Bruno Pacheco, Resigned when this scandal broke out. The president has also been accused of illegally financing his election campaign with the evidence of June’s regional government as governor. Vladimir Seron, General Secretary of the ruling party Peru Libre, who today split from Castillo, is another fact under investigation, which so far has not directly involved the head of state. Other “arguments” in support of Castillo’s accusation include creating economic instability and threatening press freedom due to criticism of the media and not providing press interviews.

28 Congressmen have signed the coup plot, Two more than the number required to accept the demand for the removal of the head of state for debate. If the motion receives 52 votes, out of a total of 130 votes, the impeachment proceedings will continue, otherwise it will be tabled. If the charge is given the green light, Castillo will be subjected to a compression procedure that will last for two weeks. The president’s resignation requires 87 votes, two-thirds of the total Congress.

Three far-right benches – the main one Fujimori – have 43 votes in favor of the parliamentary coup. They are seeking to join other departments in their coup attempt. Calculations estimate that if the dismissal continues, the chances of all 87 votes being dismissed are slim. Opposition to the government, moderate and center-right groups withdrew from the coup plot. The far right is putting pressure on them.

As they carry out their parliamentary coup in Congress, the far right on the streets unleashes violence against those who do not join their pretensions. The team called Resistance – Popularly renamed La Pestilensia-, a strike force affiliated with Fujimori, In recent days, he has violently attacked politicians and journalists from some media outlets who did not submit to the parliamentary coup. In this violent group affiliated with Fujimorism, other violent groups of the far right have recently joined, with retired military personnel playing a key role.

For the far right, Castillo has sought to promote a conspiracy since the day he won the election, a first attempt. Their coup demands are not exhausted If this method does not win in Congress.