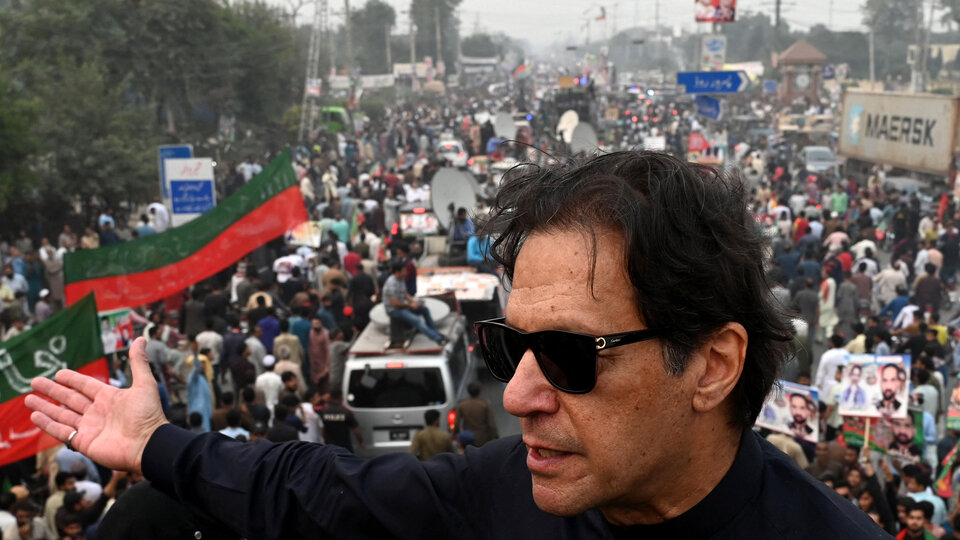 Former Prime Minister of Pakistan Imran Khan Five more people were injured this Thursday A vehicle carrying him was fired upon in East Pakistan During his march against foreign intervention.

“Thank God Imran Khan is safe,” Azhar Mashwani, a leading member of his party, tweeted.The Pakistan Tehree-e-Insaf (PTI) claimed that the person who opened fire as the march passed through Wazirabad had been “arrested”.

Another party leader, Asad Umar, told local channel ARY that Khan had sustained an injury on his leg. “Khan sustained a gunshot wound. It is not critical and he is stable. Leg injury.. He is being taken to Lahore hospital by road,” Omar said.

Pictures released by local media show Khan leaving the caravan. From there he led the procession to Islamabad, traveling in another car. He is seen with his legs tied.

Police said they are continuing to gather information related to the attack on the opposition leader. Khan has repeatedly warned that he has received threats and that his life is in danger. The arrested assailant said in the video that he attacked the former prime minister because he had “misguided” the people.

The former prime minister started a rally from the western city of Lahore to Islamabad last Friday under the slogan “Haqeigi Azadi” (“True Freedom”).His tenure came to an early end this year following an impeachment motion by the current government.

According to Khan, The audit resolution that sacked him last April, Promoted by a coalition of parties led by incumbent Prime Minister Shahbaz Sharif’s Pakistan Muslim League. Allied with America.

Khan says his removal from Washington was punishment for his visit to Russia It took place on the same day that Moscow launched its offensive in Ukraine.

The march drew thousands of supporters and, according to Khan, was not politically or personally motivated or seeking to overthrow the government. His aim was to make the country truly independent, without foreign interference.

away from Washington’s influence

This cricketer turned politician He came to power after the 2018 general elections and maintained good relations with the Pakistan Army, has great influence in the government. However, the relationship began to deteriorate in the last two years due to its new foreign policy away from the US.

At the beginning of the conflict in Ukraine, Khan wanted to remain neutral in his country’s relations with the United States and Russia. He has on several occasions publicly lamented the cost to Pakistan of supporting Washington in the war in Afghanistan.

After being sacked, Khan has implicitly referred to the army chief as a traitor To facilitate what he claims is a foreign conspiracy to overthrow his government.