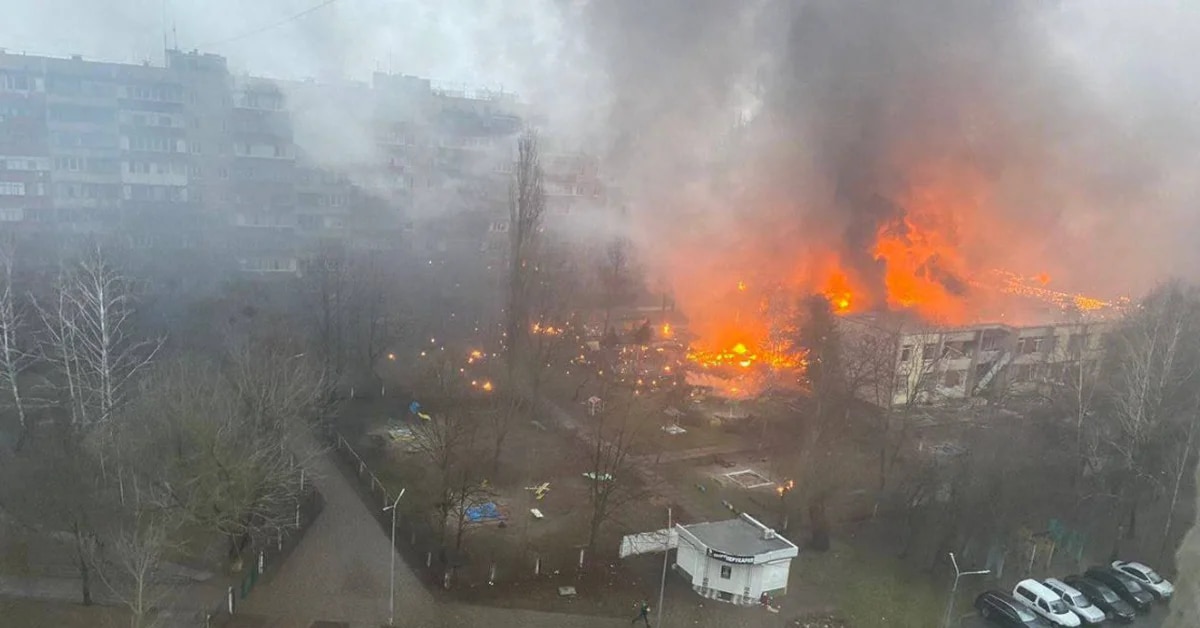 Apart from other officials, many others have died, including children and the home minister

Including 18 people Three children and the Minister of Interior of Ukraine, Denis MonastyrskyA helicopter was killed in a helicopter crash near a kindergarten on the outskirts of Kyiv, Ukrainian authorities said Wednesday.

“A total of 16 people have died so far.”, initially announced as the head of the National Police. Igor Klimenko. The dead included several senior officials Interior Minister Denis Monastirsky.

Later, at 10:30 a.m. local time, regional governor Oleksiy Kuleba updated the statistic with a statement on Telegram: “Tragedy in Brovary (east of Kiev). The number of victims increased. As of 10:30 local time (08030 GMT), 18 people, including 3 children, had died.

“This morning, January 18, A Emergency service helicopter Accident at Brovary. As a result of the plane crash, the heads of the Ministry of Interior died: the Minister, the Deputy Prime Minister and the Secretary of State,” he added. 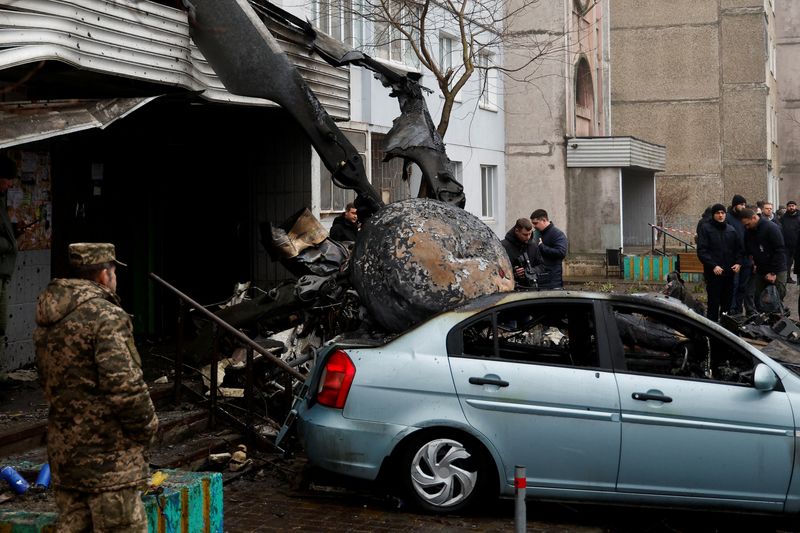 A view shows a helicopter landing on civilian infrastructure buildings in the city of Provary, outside Kiev, Ukraine, amid Russia’s attack on Ukraine.

Monastirski, 42, a father of two, was appointed interior minister in 2021.

Nine of the dead were in the helicopter, and 22 others were injured, including 10 children. 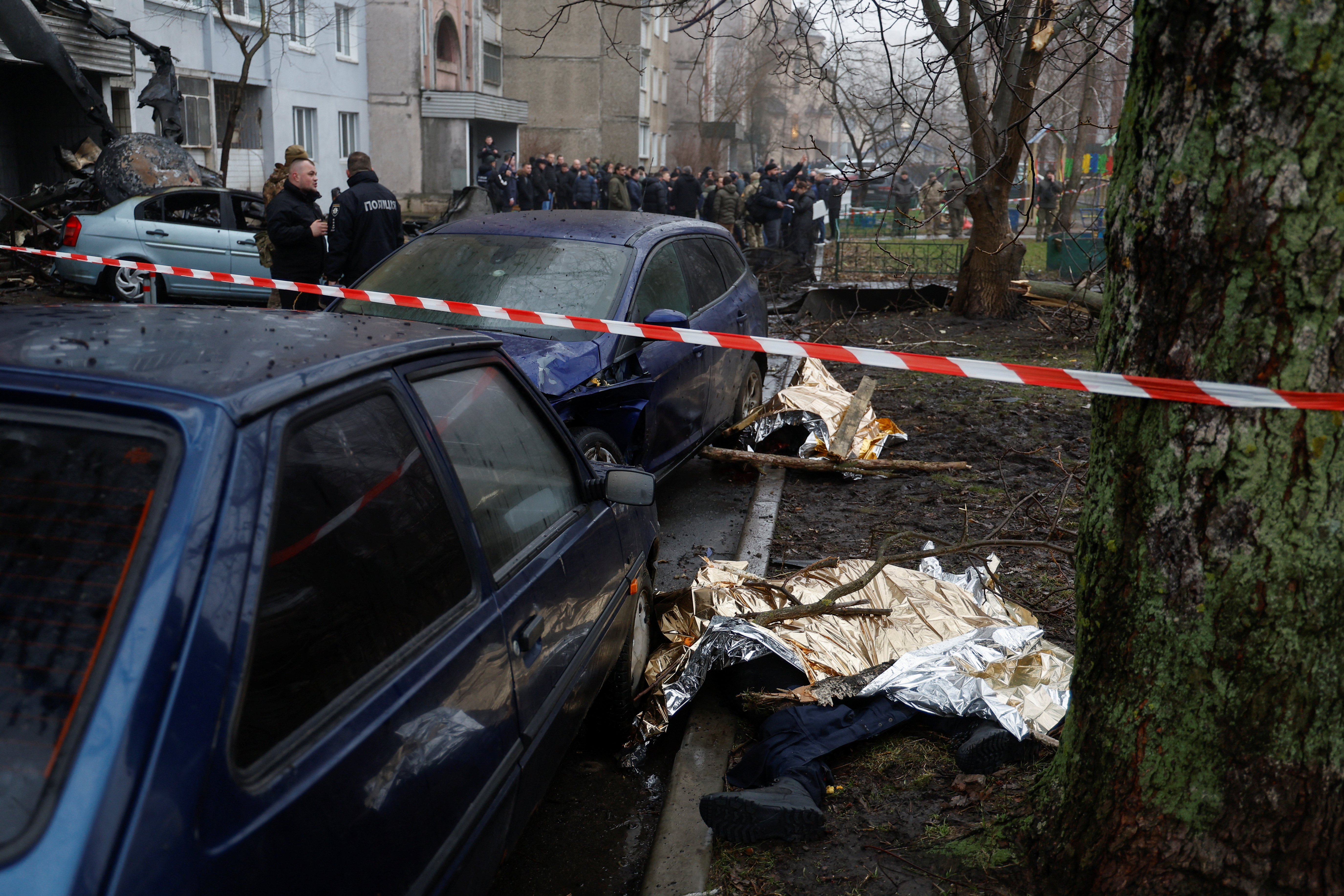 Nine of the dead were in the helicopter, and 22 others were injured, including 10 children. (Reuters)

“At the time of the tragedy, there were children and company employees in the nursery. All are evacuated at this time. There are victims,” ​​said the head of the Kyiv Regional Military Administration. Oleksiy KulebaIn his Telegram account, quoted Ugrinform.

“Information about the victims and the circumstances” of the crash is “being prepared,” Kuleba said. 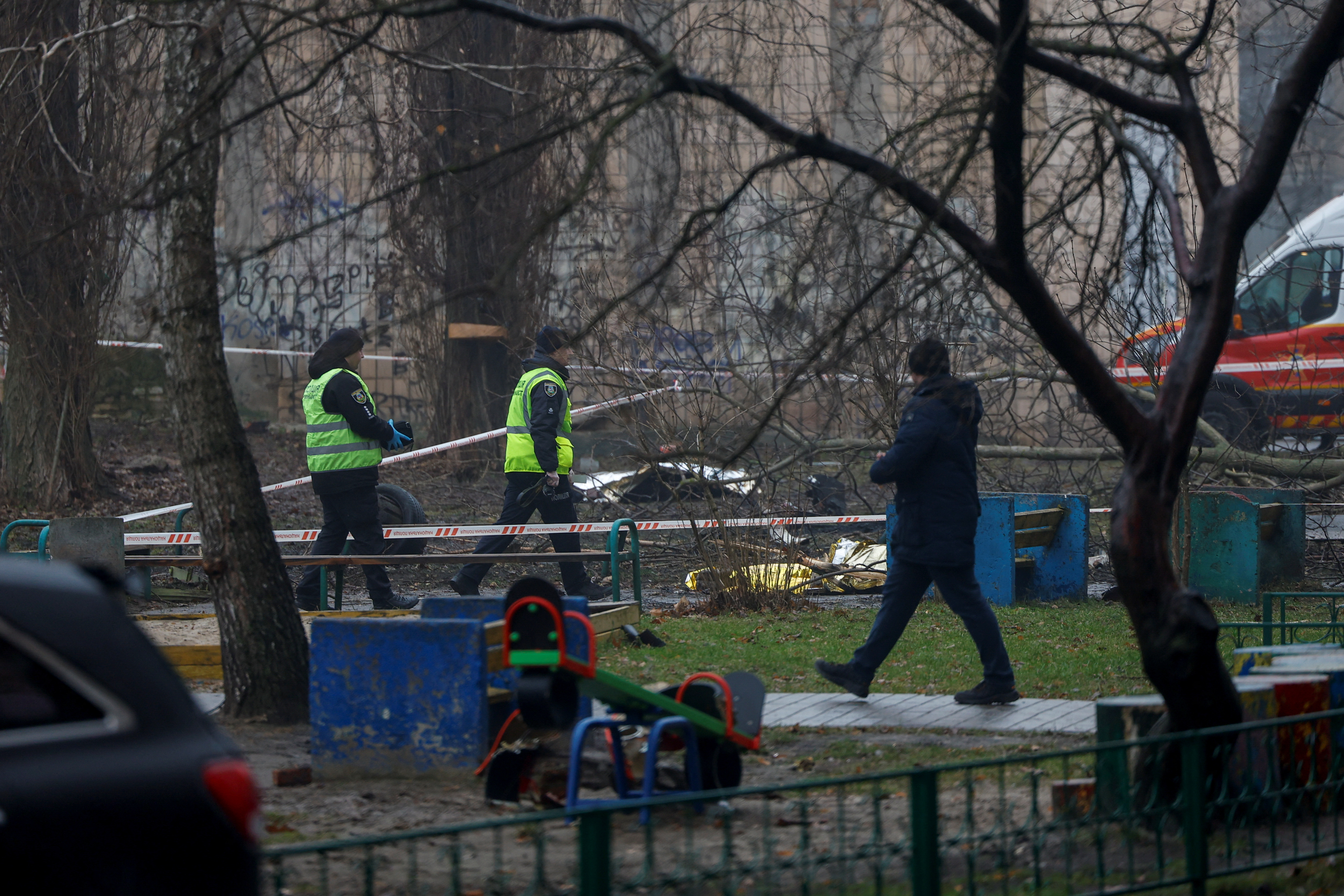 Police and emergency workers work at the site of a helicopter crash, amid Russia’s attack on Ukraine, in Brovary, outside Kyiv, Ukraine, on January 18, 2023. REUTERS/Valentyn Ogirenko

In a video that has gone viral, screams can be heard from the charred area.

The site of the accident is located in Brovary town 20 kilometers northeast of Kiev. 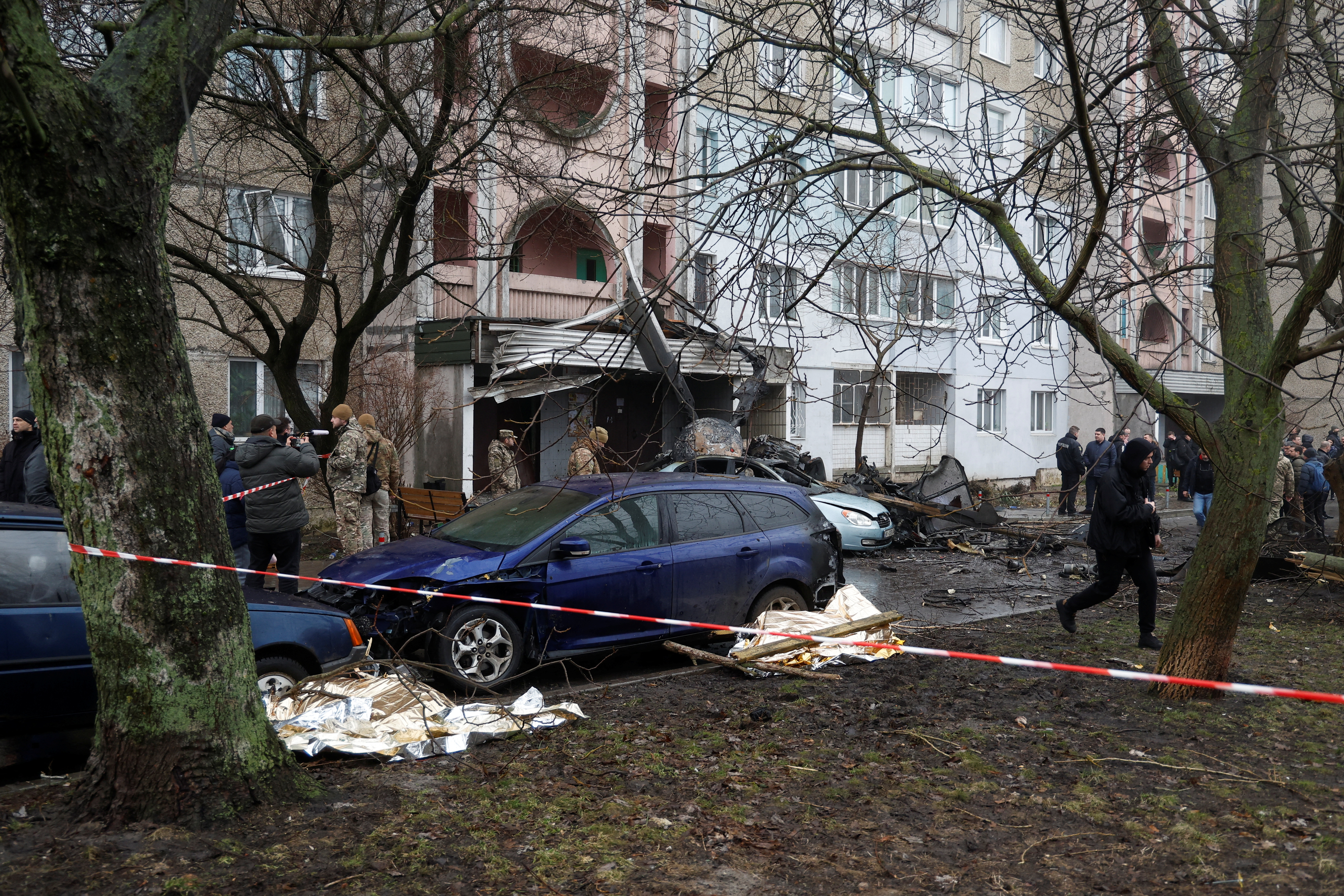 A view shows the site of a helicopter crash on civilian infrastructure buildings amid Russia’s attack on Ukraine, in Brovary, outside Kyiv, Ukraine, on January 18, 2023. REUTERS/Valentyn Ogirenko

Russian and Ukrainian forces fought for control of Brovary in the early stages of the invasion of Moscow until Russian troops retreated in early April. 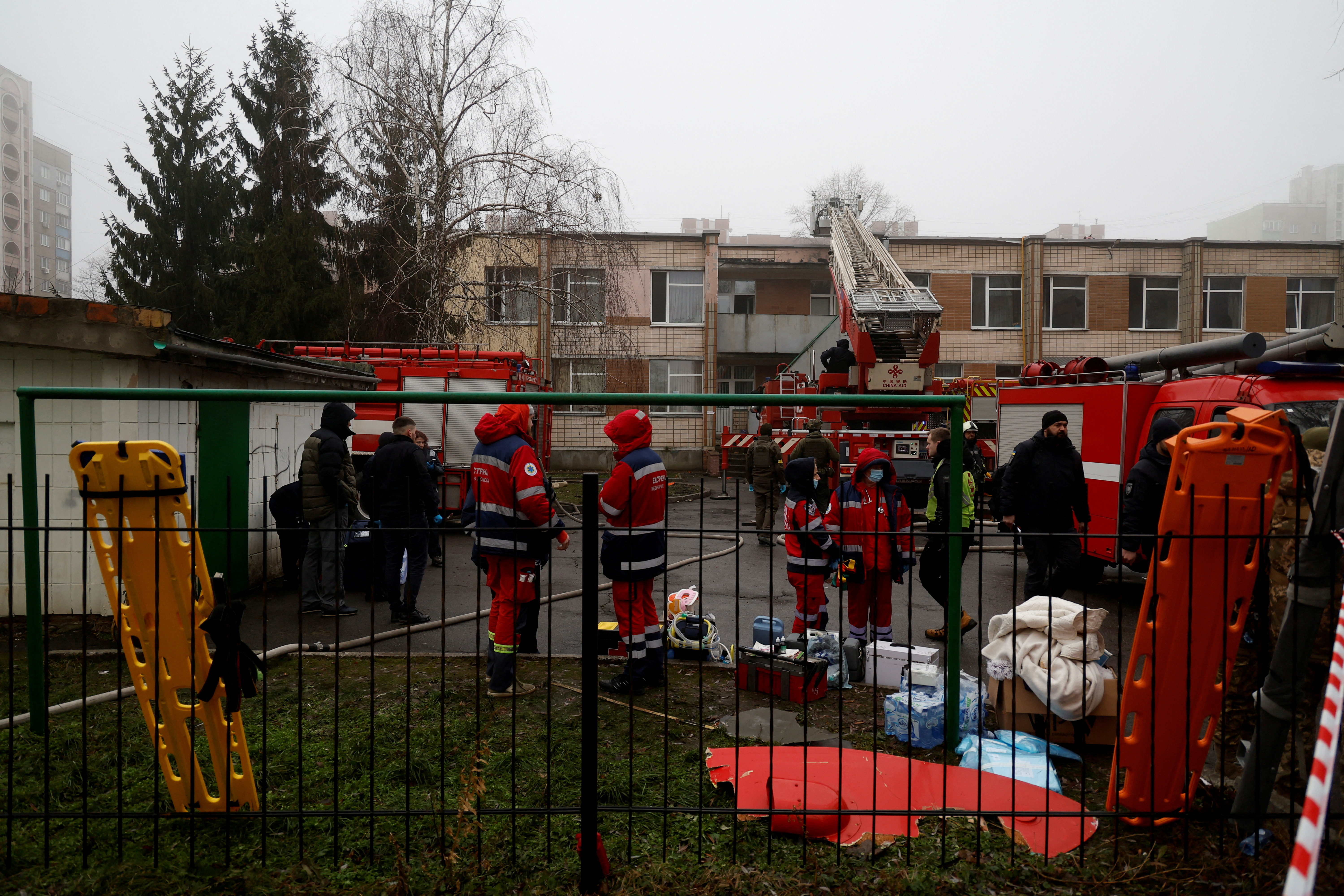 Doctors and emergency workers work at the site of a helicopter crash on civilian infrastructure buildings amid Russia’s attack on Ukraine, in Brovary, outside Kyiv, Ukraine, on January 18, 2023. REUTERS /Valentyn Ogirenko TPX Images

This incident occurred after the tragedy that led to the death 45 personsincluding six children Impact of a Russian missile on a residential building Last weekend in the eastern city of Dnipro. 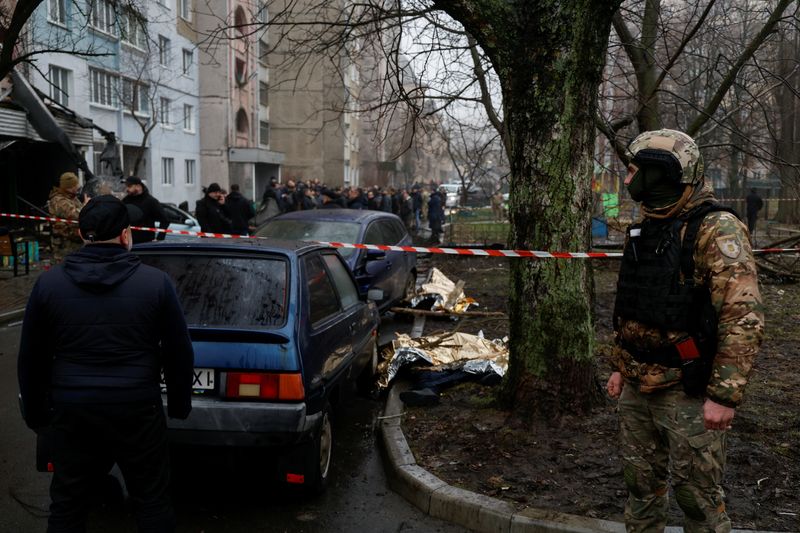 Bodies lie on the ground after a helicopter crashed into civilian infrastructure buildings in Brovary, a suburb of Kiev, Ukraine amid Russia’s attack on Ukraine. January 18, 2023. REUTERS/Valentyn Ogirenko

President of the Council of Europe Charles MichaelDenis Monastyrski, an interior passenger, expressed his grief over the downing of the helicopter.

“We join in mourning the tragic accident in Ukraine Brovary. Best friend of Minister Denis Monastirsky UE”, pointed out the former Prime Minister of Belgium in a note on social media. 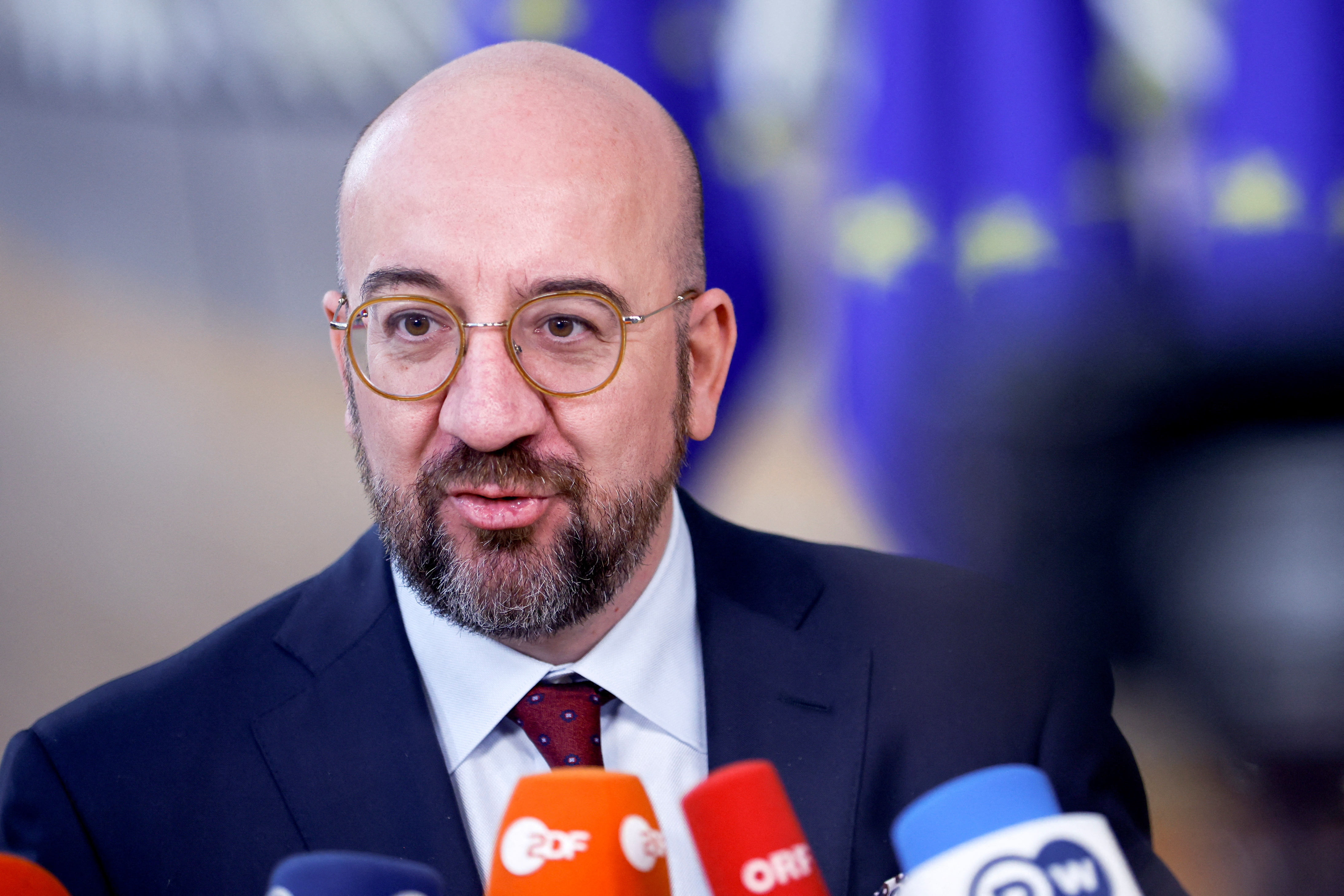 Michael sent his condolences to the families of the victims, especially Ukrainian President Volodymyr Zelensky and the Prime Minister. Denis SchmihalExcept for the Ukrainian people.

Three children were killed in the accident, and 29 others were injured. Head of the Ukrainian Police, Igor KlimenkoIt has confirmed that the victims include senior officials from the Ministry of Home Affairs and the Deputy Minister and Secretary of State are also dead. 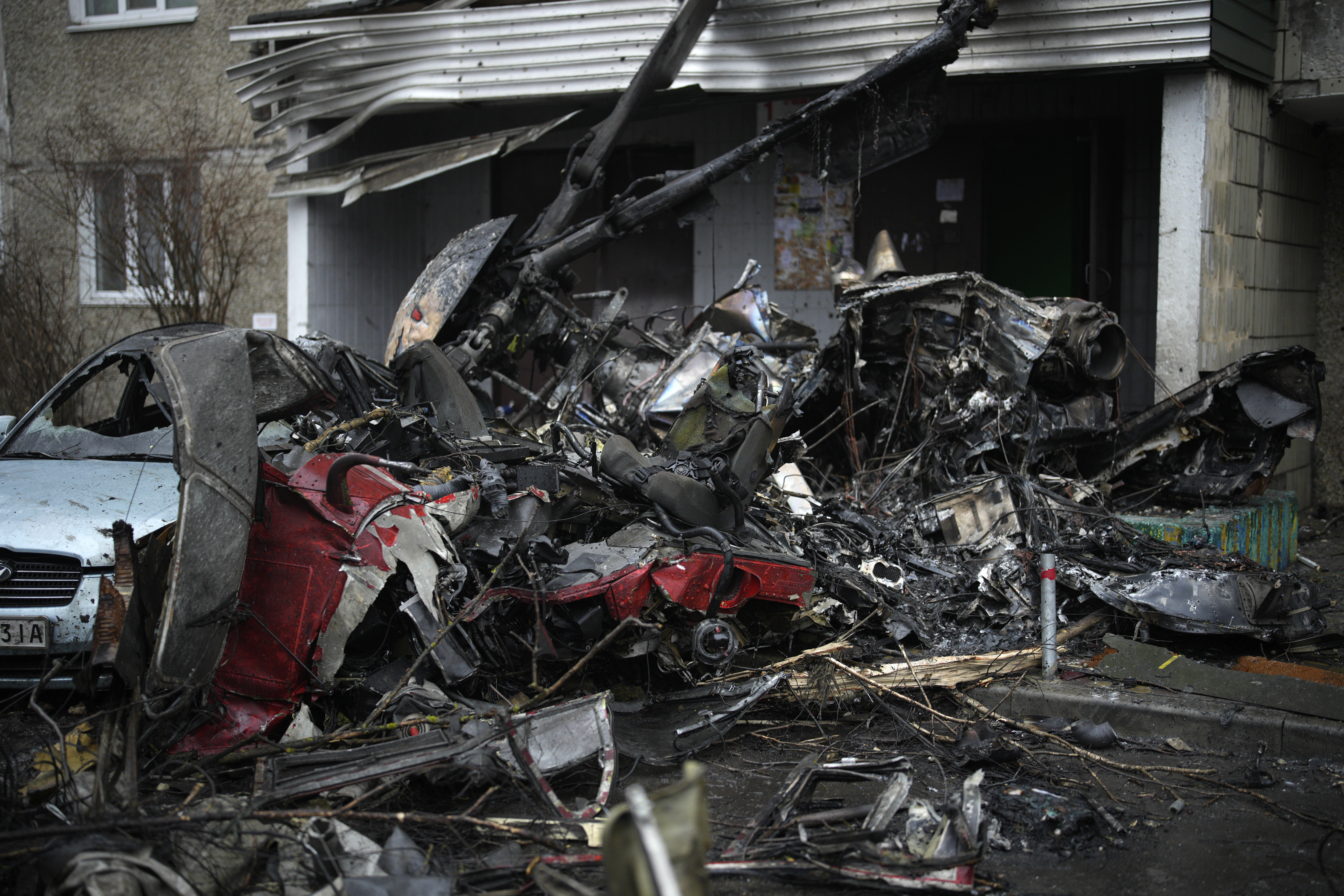 A view of the scene of a helicopter crash into civilian infrastructure at Browry, on the outskirts of Kew, on January 18, 2023. (AP Photo/Daniel Cole)

Ukrainian law enforcement agencies are considering all possible theories about the helicopter that crashed in Kyiv today.

Attorney General, Andriy KostinDeclaring that he had personally taken over the case, he indicated that the Home Secret Service was responsible for the instruction. Union. 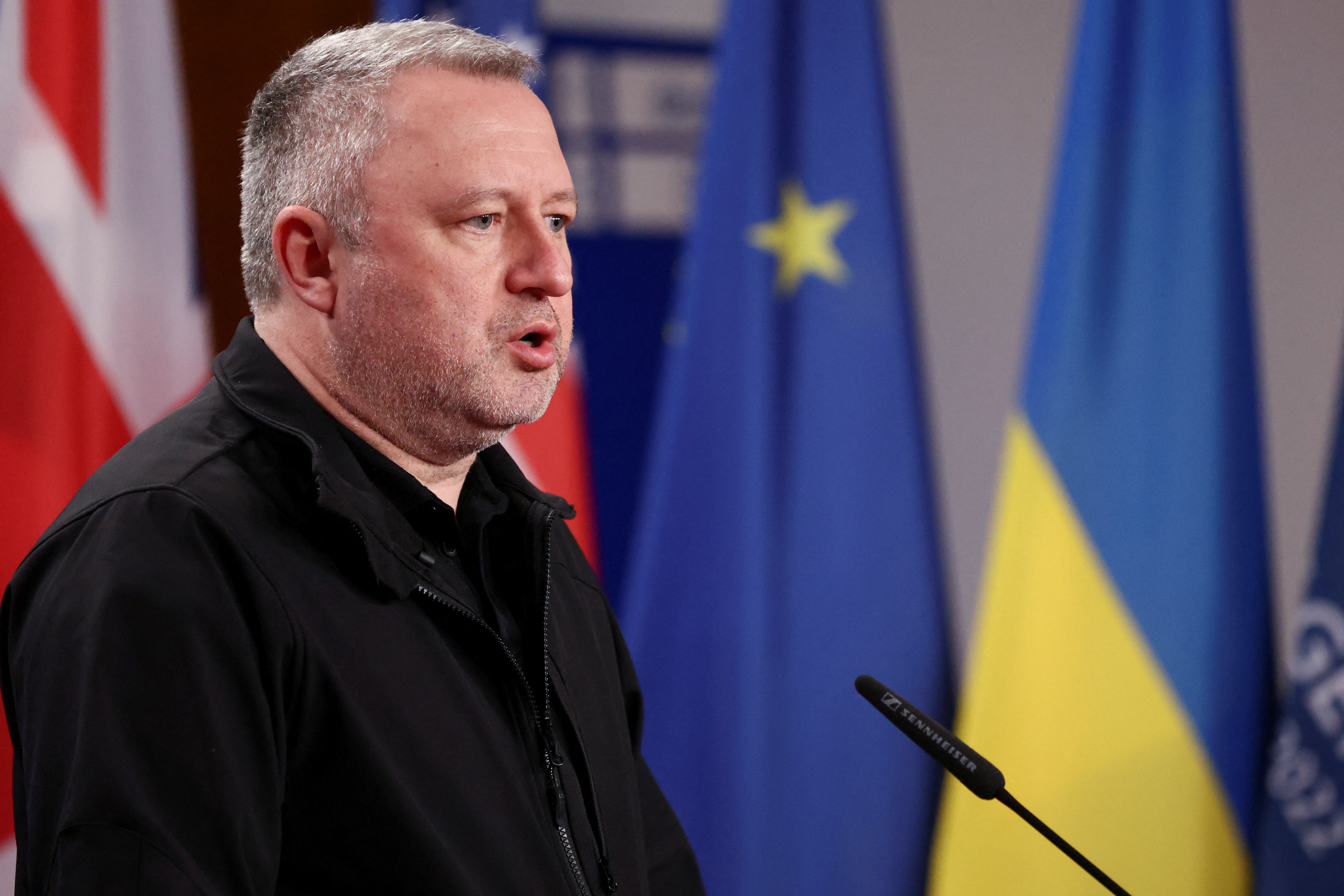 “Investigators and specialists are now working at the scene of the tragedy. Urgent instructional measures are being carried out. We are currently considering all possible versions of the helicopter crash. The investigative investigation has been handed over to the investigators of the SBU”, Interior Secret Services, he noted.

Spokesperson of the Air Force of Ukraine, speaking on television, Yuri IhnatHe noted that the helicopter that crashed in Brovary was performing the duties of the state emergency service. 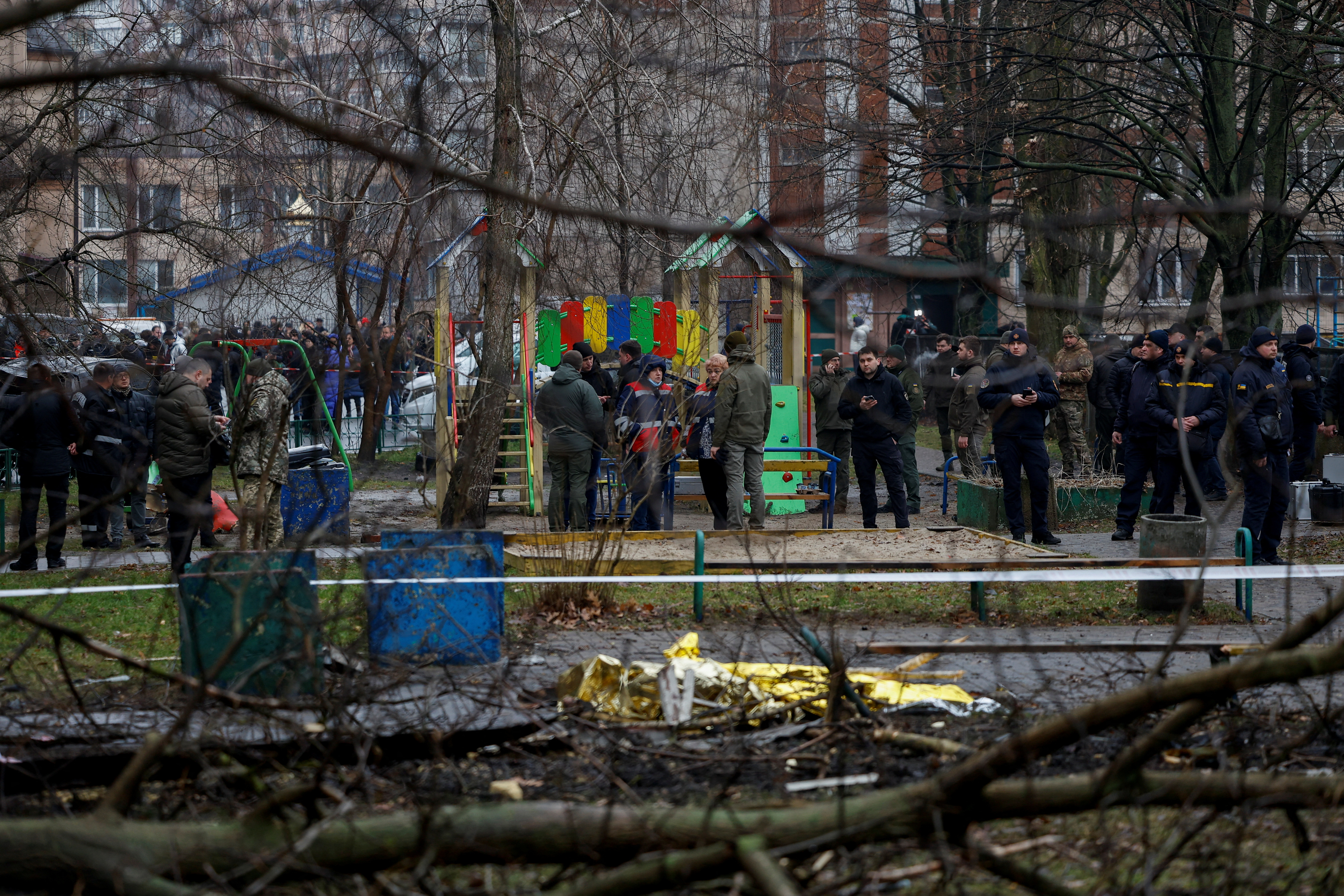 A group of people gather at the site of a helicopter crash amid Russia’s attack on Ukraine, in Brovary, outside Kiev, Ukraine, on January 18, 2023. REUTERS/Valentyn Ogirenko

“Unfortunately, this happened to a State Emergency Service helicopter that was performing its duties. Currently Ukraine has a limited number of helicopters that carry out security tasks for the country,” he said.

“We have to wait for details from the state emergency service,” he said.