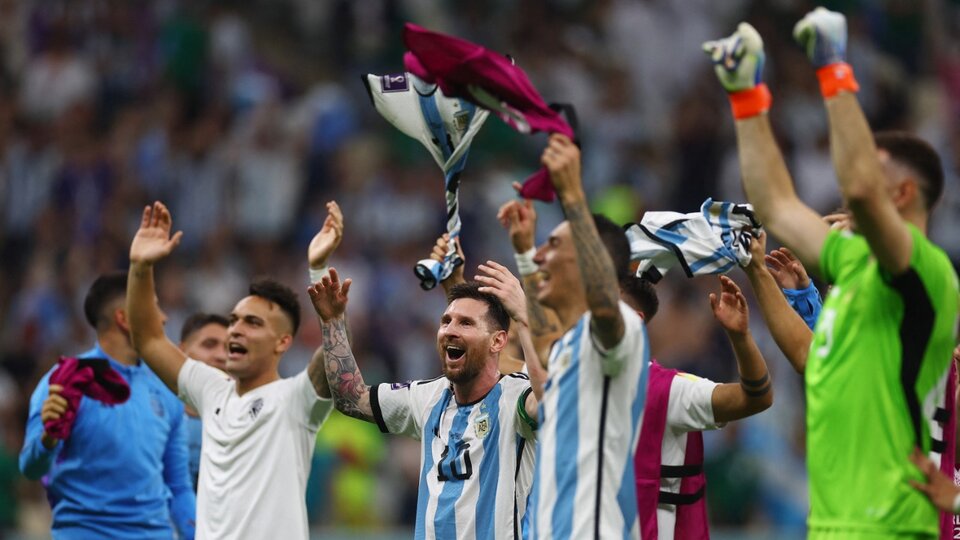 Football puts us in a frenzy at every World Cup. It is a pathway to stress. Clonazepam, linden tea or cold showers are not enough to relieve it. If the game takes place 13,800 kilometers away in a desert-surrounded and seemingly inhospitable emirate, it doesn’t diminish by taking distance. It was certain that an ugly feeling floated in the air before the relief with Mexico. The threat of early return, the imaginary intersection with Germany at the airport, as if this kind of joke on social networks predicted a fateful outcome. Good Argentinian black comedy. Antibody became a habit for those who could not afford to see a mental health professional.

Dibu Martinez explained on public TV why he was treated only days after his false acquaintance with the Saudi. “They couldn’t have kicked me twice and scored two goals.” Said in a singsong tone, it was illogical to be eliminated in the first round and after losing to Arabia. It was like a satire straight out of a magazine Charlie Hebdo.

Nervous faces and some frowns anticipated another one of the many soccer disagreements that separate us from Mexico. Because while positive impressions are overwhelming for Argentina, some memories hurt of the jingoistic feeling that always seems to appear at these World Cup events. Local sympathies for Germany in the 86 World Cup – mentioned, we attest – and a little song that hurt Qatar’s national pride. “English is spoken in the Falklands…”, the green shirt prompted fans.

Folly that disrespects 133 years of bilateral relations, Argentina’s exile in Mexico in 1976, the unity between the two brotherly nations, and even the famous mural of Siqueiros preserved in the Casa Rosada. A sacred tradition of Latin American art. A mural from 1933, called Ejercicio Plástico, evokes the kind of tension that only soccer can bring. That was most reflected in the lack of freshness Scaloni’s team showed at the massive Lusail Stadium, where nearly 90,000 were in full swing. But Messi is off and the rest are tied from head to toe.

1 to 0 of the exam came Delay, a small area with a delay of seconds that causes the progression of digital formats. The neighbors expected it, but what did it matter. Argentina were able to thank their star player, who failed after the game when he declared in front of the cameras: “In the second half, when he attacked us… the goal when we calmed down and started playing the ball, we came back to ourselves.” A Freudian slip, perhaps the world’s greatest footballer, was unconscious, but he ended it himself when Mexican goalkeeper Ochoa’s stretch was drawn to the grass. One to zero and end of treatment.

Great goal by Enzo Fernandez Take it easy Like some others, with the bravado of the shepherd surrounded by tactical stiffness, he returned to the low-heeled game without flight or courage of some art. It doesn’t matter that much anymore that the annoying person is back Delay, nor do the neighbors expect a few seconds of shouting. The ghosts of the 2002 World Cup began to tremble, their fears coming out through their holes, shaken by the energy that had taken with the team changes, another chip in the head as if everything had changed in the blink of an eye. eye..

Argentina live when they play football or they play when they live it. With no time to relax and enjoy it, almost to his quasi-religious spirit, as a lesson in how his people feel. That hope was rekindled after the Bedouin defeat, and before Twelfth Night, when the team ran out of water for the camels, our Aladdin appeared with his magical left foot to tear the ugly faces of the stadium’s nearly 46 million people.

Mexico was never a threat. Not even with an Argentinian driver like Tata Martino, our team’s former coach, who sinned a lot. What is left now is the teaching of the discovered path, football associations that should not be lost or ideas that can be confused. When the pressure plays out, that invisible partner who is hard to deal with can only break the paralysis with the magic of a virtuous person. It can be in the span of a second, in a hole in the game, in a moment of inspiration that ends with a block. The choice was complicated, but he was patient. When it comes to football, a trait that is generally healthier than sterile.